Inventor of the ‘twist-lock’ dies 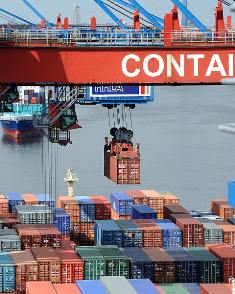 Keith Tantlinger, who died on August 27 aged 92, developed the technology that launched containerised shipping – in the process redrawing the global economic map by transforming the way cargo is moved internationally.

The story of containerisation began in the 1950s, when Malcolm McLean, a North Carolina trucking magnate who was looking for ways to make his trucking service more competitive, hit on the idea of sending his trucks by coastal ships to cities on the East Coast of America. In 1955 he bought Waterman Steamship Corporation, one of the largest shipping lines in the country.

His original plan had been to create roll-on roll-off ships that would carry his trucks and reduce costs for customers by nearly 75 per cent. However, he was not entirely happy with the idea because the truck tyres would take up valuable space and he would not be able to stack the trucks on top of one another. To find a solution he turned to Tantlinger, then vice-president of engineering at Brown Industries, a company which supplied MacLean with truck trailers.

The idea of transporting cargos in a sealed metal box is a simple one, and indeed containers had been in use since the 19th century to haul heavy cargo like coal. It was not the box that Tantlinger designed, but the all-important twist-locks, corner posts, cell guides, spreader bars and other paraphernalia which make it possible to lift and lower containers on and off ships and stack them safely. He patented several dozen inventions. His most important design feature was the slotted eyelet at each corner of the container into which a lock, called a twist-lock, could be dropped. The device was based on the principle of a bolt-action rifle. The twist-lock could be lowered into an eyelet and automatically engaged and disengaged from above, without extending beyond the edge of the container. A second container could thus be stacked on top of the first, and the two locked together.

The process could be repeated, building a tall stack. Cranes could latch directly on to the corner fittings, neatly lifting containers on and off ships, and the twist-lock could also be used to secure a container to a chassis on a lorry or goods train.

By October 1957, McLean’s container ship, Gateway City, was ready to take its first shipload of cargo from Newark to Miami; but no one was sure how the new system would perform at sea. In particular, there was concern that the container stacks inside the ship’s hold might move , creating dangerous instability.

Before the ship sailed, Tantlinger went to a Woolworth’s in Newark and bought the store’s entire stock of modelling clay — packaged in inch-square bars. As he watched the containers being stowed, he cut blocks of clay with a penknife and wedged them between the container corner posts . When Gateway City docked in Miami four days later, he retrieved the blocks to see how much they had been compressed during the voyage. The container stacks had moved no more than five-sixteenths of an inch.

Containerisation did for shipping what Henry Ford’s assembly line had done for car production. It introduced efficiency by standardising cargo handling and integrating rail, river, road and ocean goods transport into a single coordinated system. Before containerisation, cargo handling required boxes, bales, barrels and bags to be stowed individually by dock workers into irregular spaces in the holds of break-bulk freighters, a process which was not only slow and inefficient but also resulted in large quantities of goods “disappearing” at the ports. Today, a skilled crane operator can pluck a 20-ton container off a chassis, and lower it into a slot on board a container ship in less than a minute — and there are few opportunities for pilfering.

Yet the revolution was slow to take off, largely because other companies soon produced their own equipment to copy the obvious efficiencies of McLean’s Sea-Land Service. By the early 1960s there was a proliferation of incompatible designs for containers and lifting gear. When the American Standards Association established a committee to address the problem, a bitter row ensued as different companies sought to have their designs chosen as the standard.

Tantlinger, by then an executive at Fruehauf Trailer, broke the deadlock by asking McLean to release Sea-Land’s patents on its twist-locks and corner post. McLean agreed, and in June 1965 the ASA adopted a national standard that was based on Sea-Land’s design but was slightly modified to prevent the company from enjoying a commercial advantage. Three months later, the International Organisation for Standardisation adopted the ASA design as the world standard.

The containerisation revolution had an impact on the patterns of world trade that no one predicted in the early days. By reducing the costs of shipping to a negligible proportion of overall production costs, containers made it cheaper to, for example, have clothes and electrical goods made in Asia then shipped to markets in the West, rather than have then manufactured closer to home.

So while it has helped make a profusion of low-cost goods available to consumers, it has also, arguably, accelerated the decline of manufacturing industry in the West and, indirectly, contributed to current imbalances in the world economy.