It’s time to start thinking inside the box. Not just one box, however, but several. Next month the world’s first temporary shopping mall, Boxpark, will open in Shoreditch. But there will be none of the glass façades and pale paving typical of high-street shopping centres – this one will be made out of 60 shipping containers, with big brands such as Oakley, Nike and Puma, independent retailers and cafés and concept stores all housed in big metal boxes.

“I always had a love for industrial design and the idea of using containers just lent itself perfectly to a pop-up mall concept,” says Boxpark’s creator Roger Wade, who has collaborated with the owners of the site next to Shoreditch High Street station, empty for 40 years, to build a five-year structure.

He took his inspiration from single shops in shipping containers such as the Puma City store in Boston and Illy Café in New York – a coffee shop in a container with walls that open out to create seating areas. 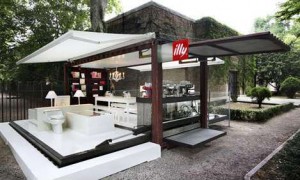 But the idea of using shipping containers also comes with economic benefits. “Most traditional retail developments try to sign their tenants up to five- and 10-year leases. In this current economic environment, for new retailers who may not have had their own space before, that is a real liability,” says Wade, who leases space for as little as one year.

“It offers arguably the most cost-efficient and flexible way for new entrants to gain exposure in the retail market,” says Boxpark’s retail agent Mark Phillipson.

And they aren’t the only ones finding that boxing up makes sense.

Look around central London at the moment and you’ll spot great white boxes overhanging the roads attached to building sites operated by construction and civil engineering firm Sir Robert McAlpine. According to the company, the temporary structures house office space, changing rooms, meeting rooms and even canteens for staff working on the projects – all fitted into cabins when permanent spaces nearby are not cost-effective or convenient.

Meanwhile, the Container Café, which opened up next to the Olympic Park last year, is increasingly busy with customers wanting to get a glimpse of the site for the Games taking its final shape. The entire View Tube complex in which the café is housed, and which also contains classrooms and arts spaces, was built using recycled shipping containers.

Art, it seems, also feels very much at home in the container. In just over a week in London, Open Gallery will exhibit works in shipping containers at the Crunch Art Fair at Hay-on-Wye.

“A trip to Miami’s Art Basel showed me the potential of shipping containers,” says Bianca Brigitte Bonomi, one of the Crunch organisers. “Running along the beach, they offered galleries and visitors a completely different experience to the conference-like interior of the fair and created an exciting space for artists to interact with. Crunch is a quirky festival, and is all about giving people something new, so it seemed fitting to incorporate these containers into the space.”

Similarly, CABIN/ET, a recycled shipping container situated in east London, just off Columbia Road, is hoping to open up for art exhibitions as soon as funding becomes available.

It’s a ripple that has spread from cash-strapped Portugal where – since its Ministry of Culture has been shut down for five years due to lack of funds – art agency P28 found funding from shipping companies and last year started housing its exhibitions in containers. London artist Sonia Boyce exhibited her work in the boxes in Lisbon earlier this year.

When times are tight, clearly you have to be boxing clever.