As well as building a cathedral out of shipping containers in Christchurch, New Zealand as reported earlier this month, Christchurch is racing to open its new look temporary shopping mall in a week’s time.

Shipping containers have replaced damaged buildings in what is being called the world’s first pop-up container mall; although similar designs have been seen in the UK recently. 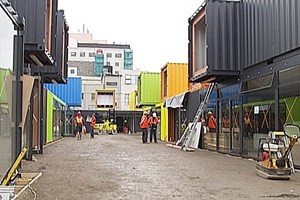 The brightly coloured shipping containers are stacked and lined ready to attract shoppers back into the old city mall and have proved very popular with sixty-five retailers registering for the container mall with a maximum of only 27 being accepted.

After months of pulling buildings down construction workers are flat out putting the new shipping container shops up. As the photo shows it is a race against time with paths still to be sealed and landscaping to be done.

It has been reported that Directors of the London Boxpark development in Shoreditch, contacted the organisers behind the Cashel Mall Restart project In Christchurch NZ, claiming they have infringed on intellectual property rights. 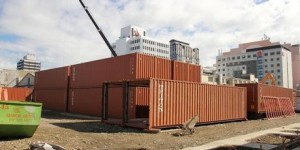 The Cashel Mall development, a temporary pop-up mall with 60 containers creating 27 shops, opens this coming weekend. Boxpark, which also comprises of 60 containers, is due to open in December.

Last week the project architect behind the Christchurch project said it was the first pop-up mall in the world although he was aware of the London project. However, Boxpark markets itself as “the world’s first and only pop-up mall”, and while they had initially supported the Restart project, Boxpark were surprised to hear it referred to as a world first.