Who says you have to be homeless to live in a used shipping container?

Who says you have to be homeless to live in a used shipping container?

Nestled among the mansions of celebrities like Gwyneth Paltrow and Paul McCartney is a brand-new “beach box” home made out of used shipping containers.

Developer Andrew Anderson said he will sell the home for what he calls an “affordable” price of under $1.5 million. That’s in an area where about 32 homes about the same size have gone this year for an average of $4.8 million.

But its new neighbors are not expected to have any NIMBY problems. In fact, they’ll hardly believe the building’s humble past. It’s all steel and glass with only one nod to its previous life — one wall and one ceiling made of exposed steel.

Besides the relatively modest — by East Hampton — price, the home’s major selling point is its eco-friendliness.  Everything used in its construction, not just the shipping containers, has been recycled. And the large glass panes will make it easier to heat on cool, sunny  days. 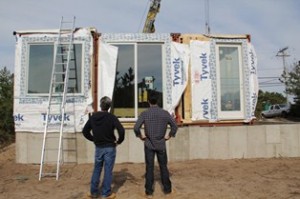 “Our goal is to be eco-friendly and to maintain a small carbon footprint,” Anderson said.

On a Sunday a few weeks ago, six 18-wheeler trucks drove up carrying six used shipping containers. The next day, the house went up — complete with windows and electricity.

The two-story, modern-style home is about 2,000 square feet and sits on .17 acres — and can accommodate a small swimming pool or large lap pool.

This entry was posted in Blog and tagged shipping container.